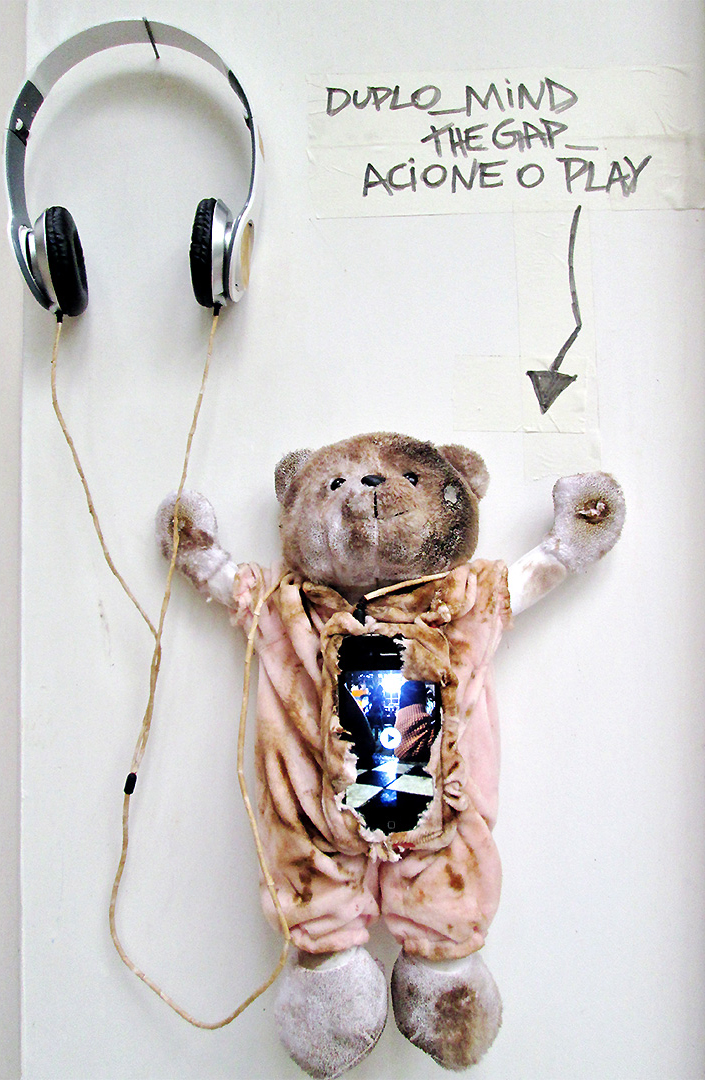 DUPLO_Mind the Gap_press PLAY, presents a video recorded by a handheld device. The same device which recorded the images that make up the video was chosen as its presentation media. This device is “coupled” to a teddy bear (stitched), that supports it. Despite is a video work, as a consequence of its support, it ends up dialoguing with elements of sculpture. This dilution of frontiers, evidenced in its technical aspect, is one of the issues that pervade the work, being problematized in audiovisual record that highlights the perennial borders between: life and art, reality and virtuality, madness and cure, objectivity and subjectivity, public and private.

The video is a static record that is not edited, filmed on a street in the neighborhood of Botafogo, Rio de Janeiro. The camera behaves as a spectator view, a hypothetical real-life theater is created thanks to a shoot that has no close ups, aiming always for a general view, open to the street events.

Featuring two events, main “scenes”, the video has as foreground the dialogue of two women, evidenced by two arms supported on a chess table. In the background there is the relationship between a resident and a teddy bear. The audiovisual record blows these independent relations, making room for new interpretations, which borns from this kind of “overlapping scenes”.

The work name refers to a hypertext, where key words serve as a means of instructing the public to trigger the work on their mobile device -“press PLAY”, besides highlighting the main ideas that permeate the work: “double “and” breach ” / “gap “, concepts developed by the anthropologist, sociologist and philosopher, Edgar Morin.